What is Chicha – Peru’s Corny Drink 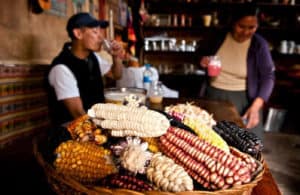 As you’re traveling in Peru, you may encounter a mysterious purple or yellow liquid being served out of buckets on the street or in small establishments. What you’ve just found is chicha, a traditional Andean beverage with history dating back thousands of years. Chicha is a timeless and iconic drink that every visitor to Peru should taste at least once.

HOW TO PERU TRAVEL TIP: Save money and stay safe when going to/from Lima Airport by using the Official Bus service inside the Airport called Airport Express Lima
Quick Tip: The best way to sample some of the most iconic dishes of Peru is to visit The Peruvian Experience. This is where you can learn about the history, culture, and the food of the gastronomic capital of South America.

“Chicha” does not refer to one specific drink, but rather a family of drinks comprised of a few popular favorites along with numerous local variations. Generally speaking, chicha is a fermented or non-fermented drink that is usually made with maize. The two most well-known types of chicha are called chicha de jora, a fermented type made with a special type of yellow maize called jora, and chicha morada, a non-fermented type made with purple maize.

This type of chicha is made similarly to other types of beer: by germinating maize, extracting malt sugars, boiling the wort, and then fermenting. In some traditional preparations, rather than germinating the maize the chicha maker chews it which kickstarts the fermentation process via naturally-occurring enzymes present in the mouth. The result is a delicious, slightly sour beverage containing about 1-3% alcohol by volume.

Chicha de jora has been made by the people of the Andes for thousands of years. The drink had a special significance in the Inca Empire, where maize was considered a sacred crop. Inca women were taught how to brew the drink in special feminine schools, called Aqlla Wasi. The finished product was drunk during special celebrations and festivals. It was also incorporated into important religious rituals, where it would be poured out as a sacrifice to the gods or served to human sacrifices. It is still common to pour out a little chicha as an offering to pachamama, the Earth-mother, before drinking.

ENTERTAINMENT TIP: If looking for fun at night, or to watch sports during the day, or even a taste of home, visit the Wild Rover Hostels for great food, sports and beer! Entrance to their bars is free even for non-guests

This rich purple drink is probably the most common type of chicha available in Peru at this time. Chicha morada is not fermented, so it perhaps has more in common with a soft drink or fruit punch than a beer. The typical preparation involves boiling purple maize with pineapple rind and cinnamon, after which are added sugar and lime juice. The exact origin of chicha morada is unknown; however, it’s generally agreed that it was created in the sierra of Peru sometime after the Spanish conquest, gaining wider popularity once it reached Lima and other coastal cities. Aside from being quite refreshing, chicha morada also has many health benefits: studies have indicated that it helps to regulate cholesterol levels, reduce sugar levels, and improve circulation. Chicha morada often accompanies food, but is also delicious by itself. It has become extremely popular in Peru in recent years, even being produced by major food and beverage companies for sale in supermarkets.

Other types of chicha

There are many other variations of chicha available in Peru aside from the two main types. Many communities have their own specific traditional recipe. Chicha de guiñapo is the signature variety of Arequipa and uses a special type of maize which only grows in that region. There are also chichas that are made from ingredients other than maize. A type of chicha made from manioc root (called “yuca” in Peru) is quite popular in the Amazon jungle regions of Peru and neighboring countries, where it is also known as masato. The valleys of La Convención in the Cusco region also produce a seasonal variety from cacao beans, fittingly called chicha de cacao. Other interesting types include chicha de maní (made from peanuts), chicha huarmeyana (a mixture of maize and sugarcane juice), and chicha blanca (made from the Andean grain quinoa). These different variations of chicha are unique products of each locality–much like local cuisine, it can be a unique expression of a particular place, giving wonderful insight into its customs and culture.

Where to drink it

Chicha can be purchased all across Peru from many different types of vendors; you can buy it from a stand on the sidewalk, in a market, or even through your car window while stopped at a traffic light. The most traditional place to drink chicha, however, is what is known as a chichería. A chichería is essentially the chicha equivalent of a beer tavern. These are typically family-run establishments, often unlicensed, where thirsty visitors can enjoy a glass of chicha and socialize. These establishments can sometimes be identified by a red flag above the door indicating that chicha is served there.

Wherever it is that you decide to partake, a glass of chicha is a unique product of Peru that every visitor should experience. We recommend checking out a food tour if you’re interested in learning more about the food and drink of this amazing country. Upyaykurikuy!! (That’s “cheers” in Quechua).

To book a Tour in Peru we strongly recommend that you use FindLocalTrips.com a search and comparison website for tours across all of South America.

2 comments for “What is Chicha – Peru’s Corny Drink”