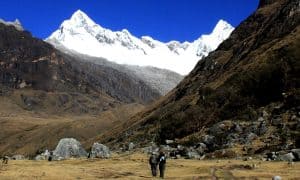 Santa Cruz, variously known as Pukarahu, Pucaraju or Pico de Huaylas (among other names), is one of the more technically difficult mountains to climb in the Cordillera Blanca. Santa Cruz is located about 20 km east of Huaylas, a small town in the Ancash Region.

Despite being at least a couple of hundred meters taller, Santa Cruz doesn’t receive as much attention as its prettier neighbor, Alpamayo, located about 6 km to the east. With its almost perfect pyramidal peak of ice, Alpamayo is officially recognized as one of the most beautiful mountains in the world – a situation that can’t do much for the self esteem of poor old Santa Cruz.