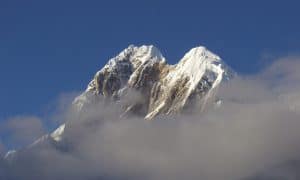 Siula Grande was made famous by Joe Simpson’s book ‘Touching the Void‘, which was later turned into a movie. In 1985, English mountaineers Joe Simpson and Simon Yates set off to summit the previously unclimbed West Face of Siula Grande. While descending, Simpson slipped down an ice cliff and broke his leg. Separated from Yates, Simpson managed – in what is regarded as one of the most amazing feats of mountain survival ever – to drag himself all the way back to base camp.

Siula Grande has a subpeak, Siula Chico, that rises to about 6,260 meters. The two peaks are connected by a lengthy mountain pass. Siula Grande is the second highest mountain in the Cordillera Huayhuash after the nearby Yerupajá.