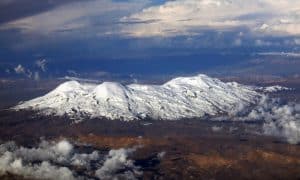 Nevado Coropuna is the highest volcano in Peru. It is located within the Cordillera Ampato, part of the larger Cordillera Occidental. The Coropuna massif, the entirety of which you can see in the image above, consists of 10 cone-shaped summits, the highest reaching 6,425 meters. The mountain is normally climbed via Arequipa, which lies about 155 kilometers (95 miles) to the southeast, and then through the small village of Chuquibamba.

Coropuna was an important mountain spirit, or apu, for the Incas. The foot and slopes of the mountain are still dotted by the ruins of Inca temples and old Inca trails, and it is likely that Inca climbers reached the summit long before modern mountaineers (including Hiram Bingham and his Yale expedition, who were the first recorded group to scale Coropuna’s highest peak back in 1911).