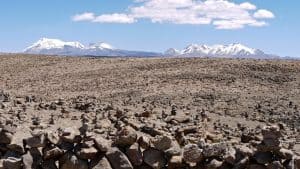 Ampato is a dormant stratovolcano in the Cordillera Occidental, about 74 km northwest of Arequipa. The active stratovolcano Sabancaya – which itself is around the 6,000-meter mark – sits just to the northeast of Ampato. In the image above you can see, from left to right, Ampato, Sabancaya and Hualka Hualka.

Ampato hit the headlines in 1995 following Dr. Johan Reinhard’s discovery of an Inca mummy near the summit of the mountain. The mummified remains turned out to be those of an Inca girl, perhaps sacrificed as an offering to the Inca gods. The body of Juanita, also known as the Inca Ice Maiden, was found in an extremely well-preserved state, and is now housed in the Museo Santuarios Andinos in Arequipa.