Few humans are lucky enough to look down on Peru from space, but we earth-bound specks can at least appreciate the stunning images taken by orbiting satellites and astronauts. To view one of the following NASA images in all its glory, simply click on the photo — you will arrive at the Wikimedia Commons page, from where you can select Full Resolution (located beneath each image).

NASA Images of Peru from Space 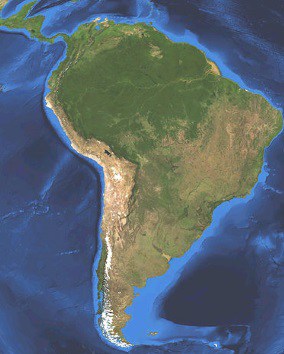 Image by Koyos, made with NASA World Wind (Wikimedia Commons)

To the left is the South American continent as seen from space.

You can also make out the Andes, the world’s longest continental mountain range, running from Chile and Argentina in the south all the way through Peru and onto Colombia and Venezuela in the north.

Lake Titicaca is also fairly easy to see on the satellite image of South America (click to enlarge), providing a good marker for Peru’s southern extremities.

Zooming in, the image below shows Peru in all its glory. Lake Titicaca lies in the far southeast, split by the Peru-Bolivia border. Another obvious feature is the dry Pacific coastline, most of which is desert. 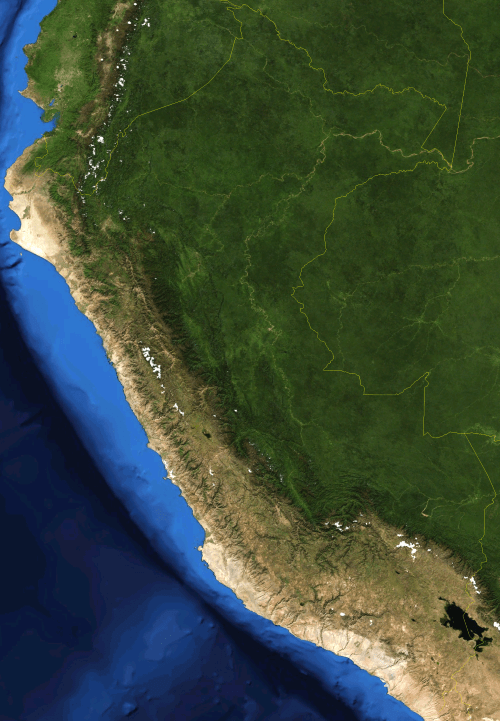 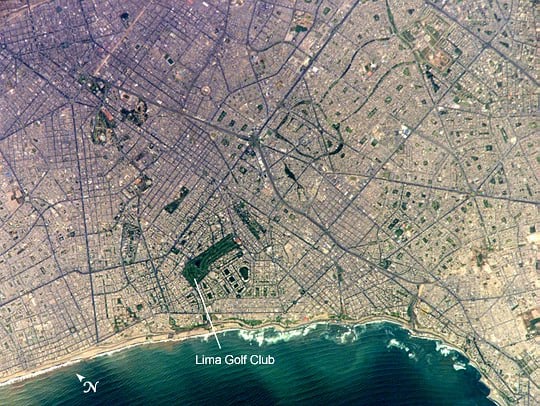 The main image above shows the metropolitan area of Lima (population approx. 8.4 million). Head south from Lima Golf Club and you’ll reach the coast and the district of Miraflores — head further south along the seafront for Barranco. Central Lima is located in the top-left section of the image. The second image features Lima’s Jorge Chávez International Airport. 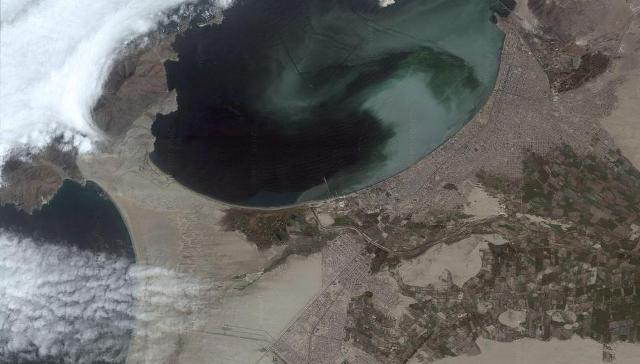 Above we have the city of Chimbote, the largest fishing port in Peru. With its two natural bays clearly defined from this angle, it’s easy to see how this coastal settlement developed into such an important harbor town.

If I could have one of these images framed and hung on my wall, this would be the one… “The White City Versus the Volcano.” Arequipa seems to be keeping a respectful distance from the 5,822-meter-high El Misti Volcano, but the distance from the city center to the peak is only 17 km (10.5 miles). El Misti last erupted in 1985. 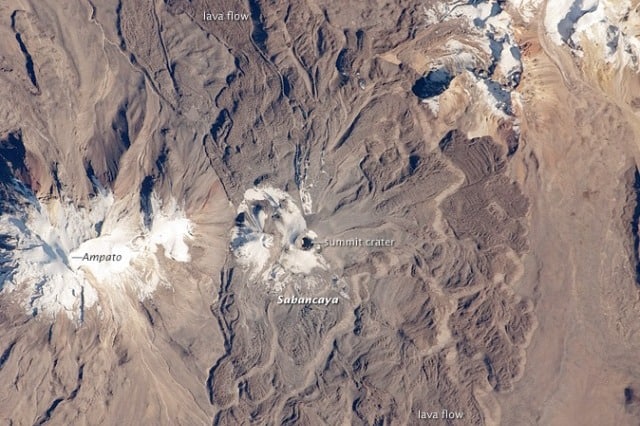 The active Sabancaya Volcano (5,967 meters) and the dormant Ampato Volcano (6,288 meters) lie about 100 kilometers (62 miles) northwest of Arequipa. Sabancaya — one of the most active volcanoes in Peru — last erupted in 2003. “Sabancaya” means “tongue of fire” in Quechua. Ampato was the final resting place of Juanita, the “Inca Ice Maiden,” whose frozen remains were discovered near the summit in 1995. She currently resides in the Museo Santuarios Andinos in Arequipa.

Nevado Coropuna is a huge, ice-encrusted volcanic complex about 150 km (90 miles) northwest of Arequipa. At a height of 6,425 meters, Nevado Coropuna is both the largest and highest volcano in the country, and one of the highest mountains in Peru. It was also one of the most sacred and venerated mountains within the Inca Empire. Archeologists are still investigating various Inca sites and trails located around, and upon, the slopes of the volcano. 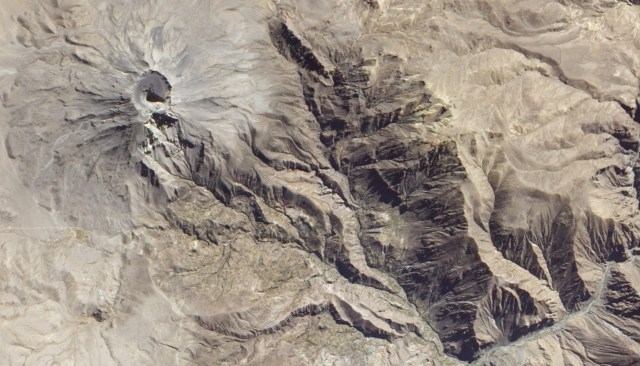 According to the Smithsonian’s Global Volcanism Program, Ubinas (above and below) is Peru’s most active volcano. Ubinas, which is located in the Moquegua department of southern Peru, last erupted in 2009. The image below, taken by an astronaut from the International Space Station, shows the ash cloud from Ubinas following the eruption of 2006. 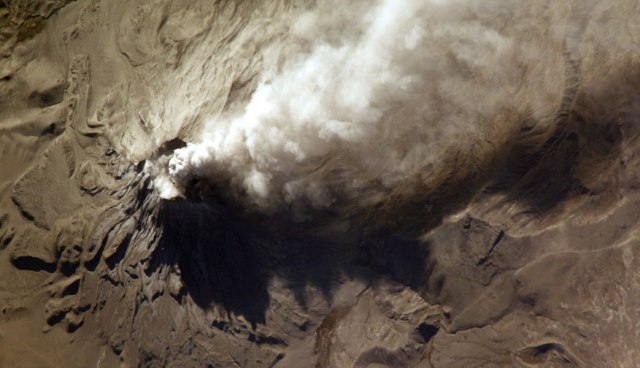 Peru from Space: Back to Titicaca

Wrapping up this tour of Peru from space, we’ll head back to one of the most prominent natural landmarks in Peru (from above, at least).

At an altitude of 3,812 meters, Lake Titicaca is the highest navigable lake in the world (the definition of “navigable” is debatable, but we’re talking big boats rather than canoes). Titicaca is also the largest freshwater lake in South America, with a total surface area of 8,372 km². Water levels rise and fall on a regular basis, but shifts in the global climate have raised fears about the lake’s long-term health. In 2009, the Lake Titicaca Authority warned of critically low water levels, highlighting potential threats to both fish and plant life — and, in turn, to the wellbeing of the region as a whole.