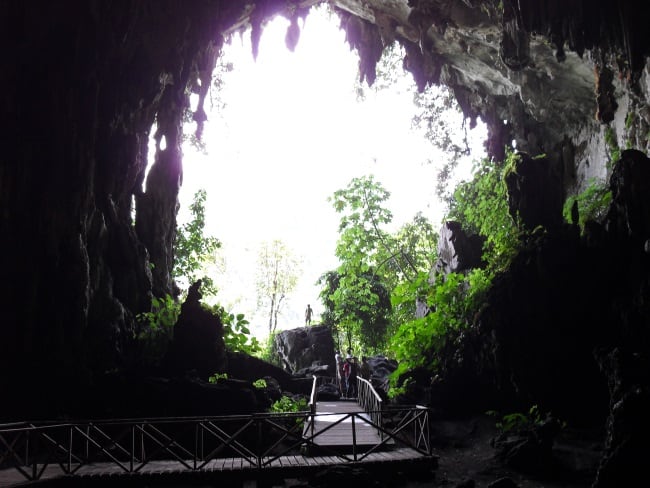 The gaping mouth of La Cueva de las Lechuzas in Tingo Maria National Park. The boy on the rock gives you an idea of the scale; left of center is The Thinker rock formation (photo © Tony Dunnell)

Tingo Maria is unlikely to win any awards for urban splendour, but that’s easy to ignore when it has the Parque Nacional Tingo Maria right on its doorstep. The 4,777-hectare park is home to a number of attractions, including La Bella Durmiente (a mountain range that resembles a sleeping woman of local legend) and one of the area’s most popular sights, the fascinating Cueva de las Lechuzas.

La Cueva de las Lechuzas (The Cave of the Owls) is a deep, dark and damp cave located in the lower reaches of the Bella Durmiente mountain range. A series of wooden steps lead up from the jungle floor to the cave entrance, from where a wooden walkway continues into the dark recesses of the cave itself.

A cacophony of chattering and chirruping greets you as you walk in, the sound rising with each step taken. But it isn’t owls that make all this noise, as the name of the cave would suggest. And those aren’t just bats swooping over your head.

The cave is home to a colony of oilbirds, strange nocturnal cave-nesting birds that are largely confined to South America (where they are commonly known as guácharos). The birds rest and hover about their nests during the day, leaving the cave to search for food only after nightfall. Another strange quirk of these peculiar birds is their use of echolocation in low light conditions. It’s these clicking sounds that echo around the cave, adding to the overall atmosphere of otherworldliness.

You can also see parrots, bats, hummingbirds and swallows in or around the cave entrance, alongside a variety of weird and wonderful insects.

The ancient limestone cave is also home to a variety of impressive rock formations. Massive stalactites and stalagmites have slowly extended over the course of time, some forming strange shapes and figures. Keep an eye out for “The Thinker,” a human-shaped figure sat in contemplation on a rock near the entrance of the cave.

The wooden walkway stretches a reasonable distance into the initial cave, but the true depths of the greater cave system are still unknown. Explorers have reached 405 meters inside the cave, but it’s believed to be much more extensive (there are stories about people venturing in and never being seen again).

Three large chambers have been found, the largest being the first and most accessible, which measures about 65 meters in length. Few visitors go beyond the first chamber. The lack of light, the dirt and dampness, and the narrow crawl space between the first and second chambers makes moving between the two problematic (I tried it on my first visit using the light from my cell phone to see where I was heading – it was a bad idea).

If you do want to go deeper into the cave, you should arrange things beforehand with a professional potholer (or with a reliable local guide, at the very least). 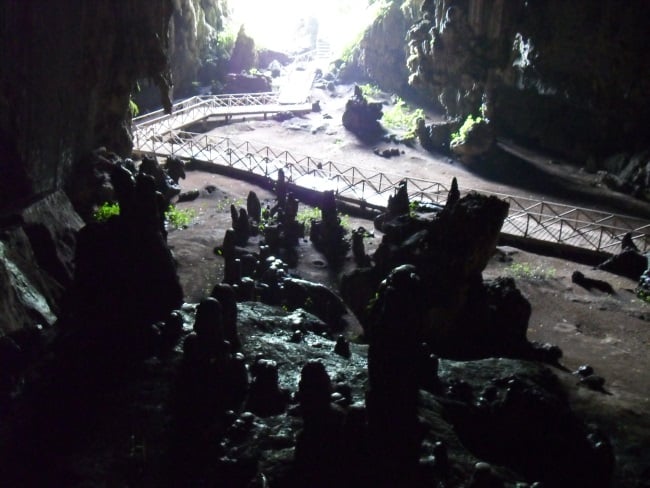 Getting To and Going Inside the Cave

It’s easy to get to the Cueva de las Lechuzas from the center of Tingo Maria. Mototaxis run between the town and the park entrance from a stop on Avenida Raimondi.

Guides aren’t necessary for standard visits. Once you have paid the S/.5 park entrance fee, you can walk on up to the cave. Your choice of footwear is important for this little excursion. Hiking boots are a good option as the oilbirds spend a great deal of time plastering the cave floor with droppings (sandals, therefore, are not a wise choice). Take a torch to help you see where you are walking, but it’s important that you don’t shine it directly at the birds as the light disrupts the colony.

It’s easy to become transfixed by this fascinating and eerie place, so set aside enough time to explore the cave at your leisure. Locals recommend an early morning visit (when more light enters the cave) or you can go later and watch the oilbirds as they emerge from the cave after sunset.

Either way, a trip to the Cueva de las Lechuzas should be high on your list of things to do in Tingo Maria. 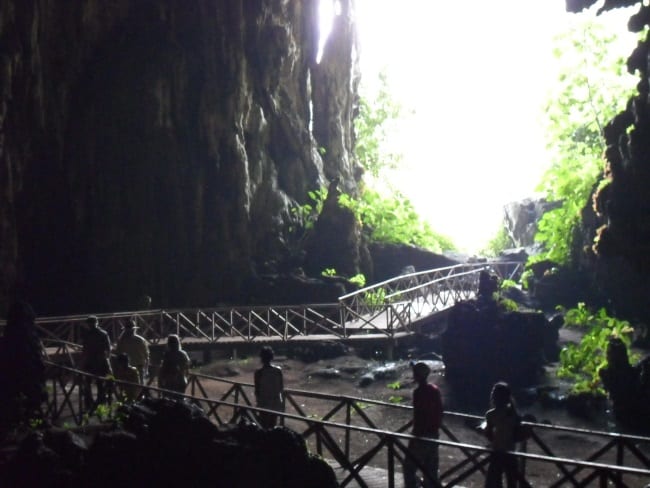 Returning to the light along the wooden walkway (photo © Tony Dunnell)

There is one safety issue that nobody seems to mention to visitors before they enter the cave.

The presence of fungus in the cave (Histoplasma capsulatum) can cause a disease known as histoplasmosis (variously known as Darling’s disease, Cave disease, Spelunker’s disease or, locally, Fiebre de Tingo Maria).

I found out about this after my second visit and, to be honest, I can’t comment with any authority regarding the risks involved. I doubt a single visit could pose any major risk, especially if you stick to the walkways inside the cave rather than wading through the dust and bat shit.

If you’re entering the cave with little kids or if you or your companions have any existing medical conditions (especially involving a reduced immune system), then I guess it might be wise to seek medical advice before entering (or at least cover your kid’s nose and mouth with something). You can start with this info about histoplasmosis from the Centers for Disease Control.