The following table shows the largest cities in Peru by population (more than 100,000 inhabitants), according to the 2007 national census — the last census held in Peru. Data from 2007 is obviously not ideal, but the census remains the best means of comparing population sizes in Peru’s major cities. You can find future population estimates for Peruvian cities at the Instituto Nacional de Estadística e Informática (INEI) website.

The Largest Cities in Peru by Population

As the following map shows, seven of the ten most populous cities in Peru are located in coastal departments to the west of the Andes: 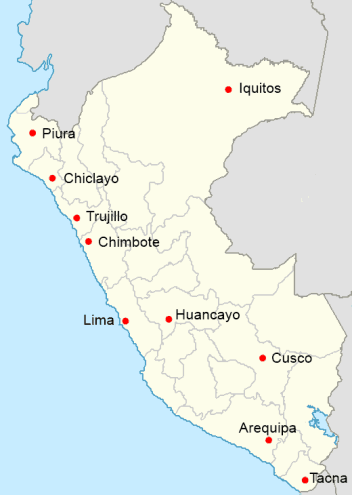 The 10 Largest Cities in Peru by Population

The following table lists the 12 most visited cities in Peru by foreign tourists according to the BADATUR Peru tourism database. Of the 12 cities, six feature in the list of the 10 largest cities in Peru by population (see map above). For foreign visitors, the city itself isn’t always the main draw: individual tourist attractions located within or near the city are often of greater importance…

The six most popular cities in Peru are all located in the southern half of the country (Lima and south of Lima). That’s no great surprise: the southern route is known as the Gringo Trail for good reason.

Your Favourite Cities in Peru

Out of interest, what are your favourite cities in Peru and why? Do you like the sights and sounds of popular cities like Cusco and Arequipa, or do you have a quirky affection for one of Peru’s less-visited towns or cities? Let us know in the comments box below. Thanks!

If you are interested in booking a trip in your favourite cities in Peru we suggest you check out FindLocalTrips.com a tour comparison website with heaps of info and many of the different options for taking that trip of a lifetime.

2 comments for “Cities in Peru”